We got up, again, in time to have breakfast downstairs at our hotel. Breakfast never disappointed us. The food was consistent and plentiful. Plus, the coffee was great! After breakfast, we got ready and went down to the Nissan Crossing, again. We found out that there was a 2nd level to the place so we wanted to see what other cars were in display. Upstairs there was a Nissan Concept 2020, which was just a shell of a concept car. Then there was a Nissan GT-R Nismo. 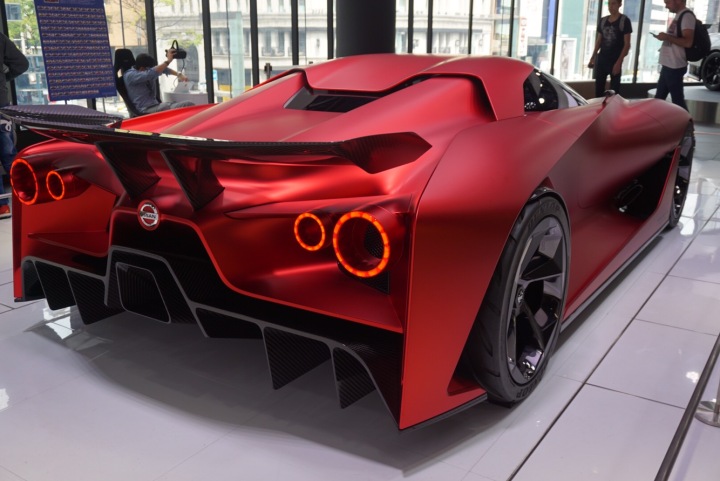 After Nissan Crossing, we jumped on the Hibiya Line towards Naka-Meguro. Our stop was the Roppongi Station. Just around the corner from the station was our first stop: Ms. Bunny Cafe! Ms. Bunny Cafe is a bunny cafe that also has hedgehogs and chinchillas. There are 2 cafes on 2 different floors. The 2nd floor of the building is the hedgehog cafe. The 3rd floor has bunnies, chinchillas, and hedgehogs. We got there 20 minutes before the cafe opened so we just waited around with the rest of the customers waiting outside. Everyone waiting were tourists just like us. Well once the doors opened, everyone in front of us went into the hedgehog floor, leaving T and I as the first patrons of the day for the bunny cafe. T was pretty excited as he absolutely loves bunnies. He has this weird love for them even though he’s pretty allergic (don’t worry, he took allergy medicine beforehand). When we got upstairs we were sat down on some cube stools at the end (it appears that the cafe can accommodate about 8-10 people at a time). Our stools faced each other with a small table separating our stools to the stools next to us. The table held napkins, hand sanitizer, and wipes. They gave us instructions on how everything worked and asked us how long we were going to be in the cafe (minimum was 30 minutes for ¥1190) and if we wanted to get any snacks for our bunnies (¥540). We opted for 30 minutes and bunny snacks for each of us. Then we were able to choose our bunnies from the cage. We decided to go with two mini rex bunnies that were in the same cage. After choosing, we sat back down and we were given blankets and a pet pad on top of the blanket.

T got his bunny first. Probably within the first 30 seconds his bunny peed and pooped everywhere (on the pad and some got on his shirt). His bunny was a bit hyper, trying to hop around. He gave the bunny treats, which only calmed the bunny down for a couple of seconds and off to trying to hop around.  Needless to say, T thought his bunny was cute, but a pain. My bunny on the other hand was chill the entire time. The bunny just sat on my lap and let my pet it.

After 5 minutes we changed animals and petpads. T got a chinchilla and I decided to get the other chinchilla that was in the same cage. When I got my chinchilla, it was super hyper. It kept trying to escape my lap. After giving it some treats and placing my hand underneath it, the chinchilla stayed calm. And oh my gosh are chinchillas super soft. Their fur was just fluffy. T’s chinchilla was crazy. This thing kept trying to jump onto him and climbed up his arm and onto his shoulder. However, it was not as crazy as the chinchillas next to us. The girls next to us couldn’t control their chinchillas and they were running and hiding everywhere.

After about 15 minutes with the chinchillas, T had enough and wanted to hedgehog. Both of our hedgehogs were super chill. All they did was sleep in a ball in our hands. Petting them was super weird. They had this prickly feeling, but it was also smooth. Hard to describe. When our time was up, we parted ways and left the cafe. I asked T how was the bunny cafe and he rated in a 6/10. I felt pretty bad because I really wanted him to have a good time there, but his animal choices were just not for him. He did like his hedgehog though. 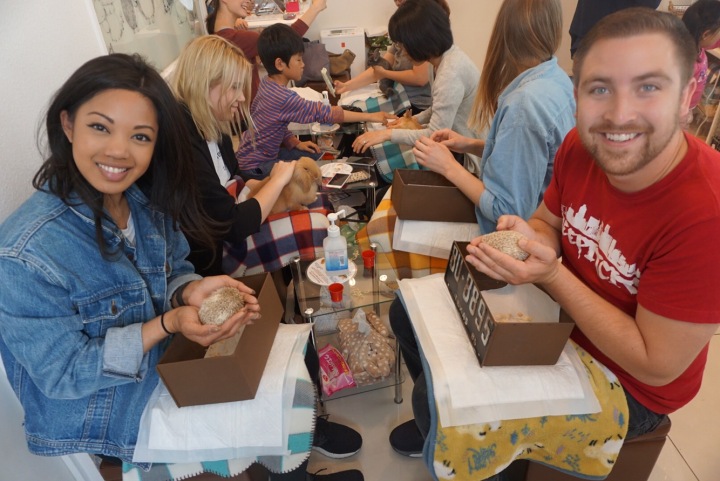 As we were heading down Roppongi Dori towards Roppongi Hills, we found a gyro place that smelled amazing. Since we were both hungry, we stopped by and had lunch. It was pretty much a food counter in the front of a building. T and I went in an sat at the counter. I ordered a lamb gyro and T had this bowl of just meat and some veggies and we both got Dr. Pepper. We devoured our food because it was delicious. After finishing our food, we made our way to Roppongi Hills to check out the Tokyo City View Observation Deck at the Mori Tower. We paid the ¥1,800/ each admission. The admission included the Observation 52nd Floor and The Marvel Exhibit that was shown in the Mori Arts Center Gallery. The 52nd Observation Floor is at 218m, whereas if you spent an additional ¥500, you would have access to the outdoor Observation Deck at 270m. Well, we found our way in an elevator going up to the 52nd floor. As soon as we got off the elevator, we were greeted by a cafe and the Marvel Exhibit. Then, there was the floor to ceiling windows and the view. T was not a fan of the height.

At least the Marvel Exhibit kept him distracted from the fact that we were up so high. The exhibit had a large Iron Man, the evolution of Iron Man suits, and some costumes from the different Marvel and Avengers movies.

We didn’t take many photos of the exhibit as majority didn’t allow photography. When we left the exhibit, we headed for the shopping area and went into Adidas. What I’ve noticed about the Adidas there is that they’re all about the NMDs and Alpha Bounces (and other Bounces), but not so much the Ultra Boost shoes. Since they didn’t have what T was looking for we decided to head towards the train station. That’s when we came across Franziskaner, which is a German Bar and Grill. We sat outside and ordered beers. 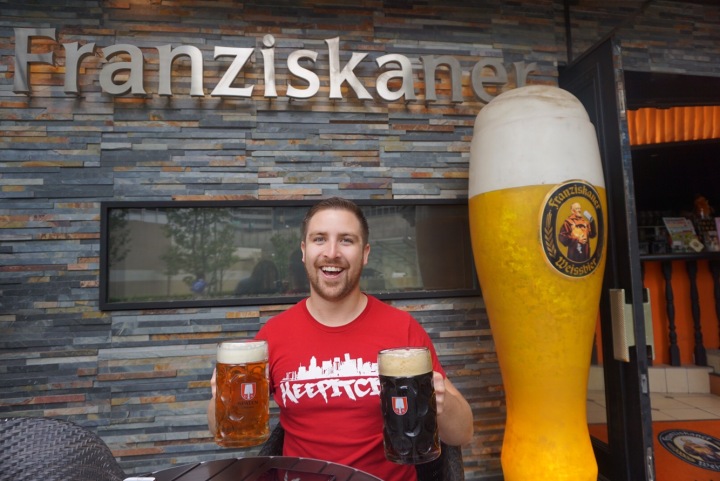 After we finished our beers, we went back to the Roppongi Station, got on the Hibiya Line towards Tobu-Dobutsukoen, and found ourselves back in Ginza.

For dinner we decided to just chill and go downstairs to the buffet for dinner. The dinner buffet did offer salads; a cheese and meat board; bread; ramen; foie gras; steak; and other hot dishes. I got a couple of rounds of foie gras and steak cooked medium rare and each time was delicious! We noticed that during dinner, the place filled up pretty quickly with people coming in from after work. A large group of colleagues came and filled up the whole middle section just as we were finishing up. They ordered pitchers of beer and talked business.

After dinner, we went back to our room and watched some TV. We found the news (and it was in English) so we decided to watch that. They kept warning us that there was a huge storming coming in from the Pacific and to expect heavy rain and 100km winds. They kept saying we needed to stay indoors. That pretty much dampened our plans for Disney Sea the next day. So, we walked over to the liquor store across the street to get some drinks to bring back to the room. Also, T wanted to celebrate my birthday at midnight. We bought a 6 pack of Asahi and a bottle of Sake, as well as some large 2 litter bottles of water. We went back to the room and watched TV.

At midnight, T greeted me Happy Birthday with some sake bombs. We had a couple and then called it a night. Cheers to the big 3-0.