According to the forecast, we were supposed to have stormy weather for my birthday. We decided to not go to Tokyo Disney Sea, and instead, head out to Shibuya. Tell me why we woke up to a nice sunny day with no clouds in sight. It would’ve been a perfect day for Disney Sea; however, we did wake up later than usual so that was just not in the cards. We woke up, threw on our usual breakfast buffet outfit (sweats and a t-shirt) and went downstairs to eat. After our usual breakfast (which we never got tired of), we got ready for our day and headed out to Shibuya.

We walked to the Ginza Station, took the Ginza Line towards Shibuya, and got off at the Shibuya Station. Our first stop upon arriving at Shibuya was the Hachikō statue, which is right outside of the station. Hachikō was a very loyal Akita dog that met his master at the Shibuya Station when he would come home from work. Even after his master’s death, Hachikō kept coming to the station until his own death 10 years later. So, a statue was a erected to honor Japan’s loyal dog. 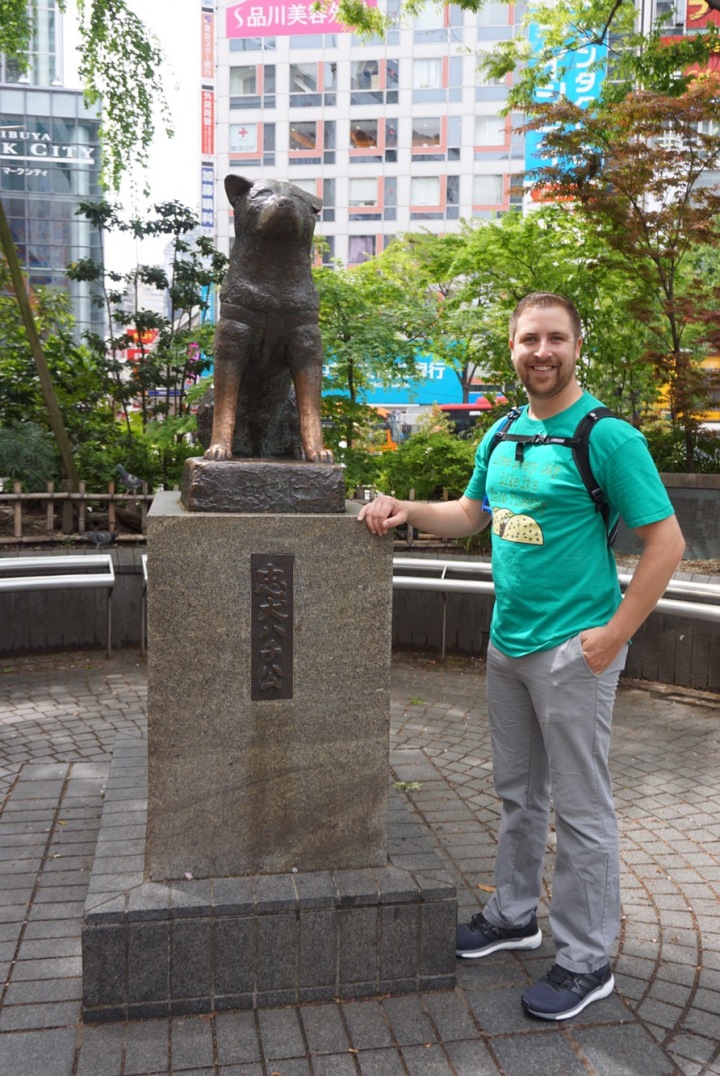 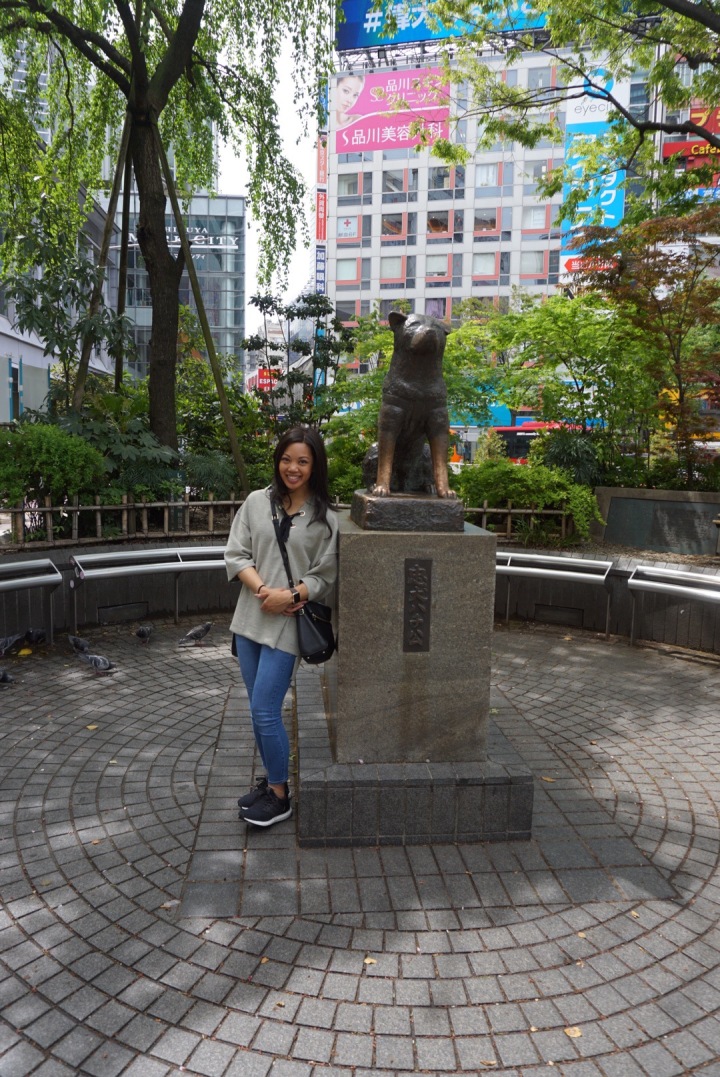 After, we experienced the Shibuya Crossing. Honestly, I thought it was going to be more hectic and crazy than it actually was. Yes, there was a bunch of people crossing, but for some reason I was expecting like a MOB of people.

Anyways, we walked throughout Shibuya and found ourselves at the Adidas store. There, I cam across a pair of shoes that I liked, so I bought them. Just like all the other stores we went to, they did not have any Ultra Boost shoes for men, so T did not get one. He, however, got to try out this Climachill thing that they had in the store. He tried on their Climachill shirt (which is to designed to keep the wearer cool and comfortable by pulling heat away from the body and provide a cool, refreshing touch to the skin), went into this tube thing that had a trampoline inside and a camera that also recorded his body temperature. For one minute, he had to jump around, wave his hands, run in place, etc. to raise his body temperature. Supposedly, it kept him cooler than usual. I just thought he looked like Captain America inside the tube thing. I love when T wears blue (especially light blue) because it brings out the color of his eyes more. *SWOOOOON* 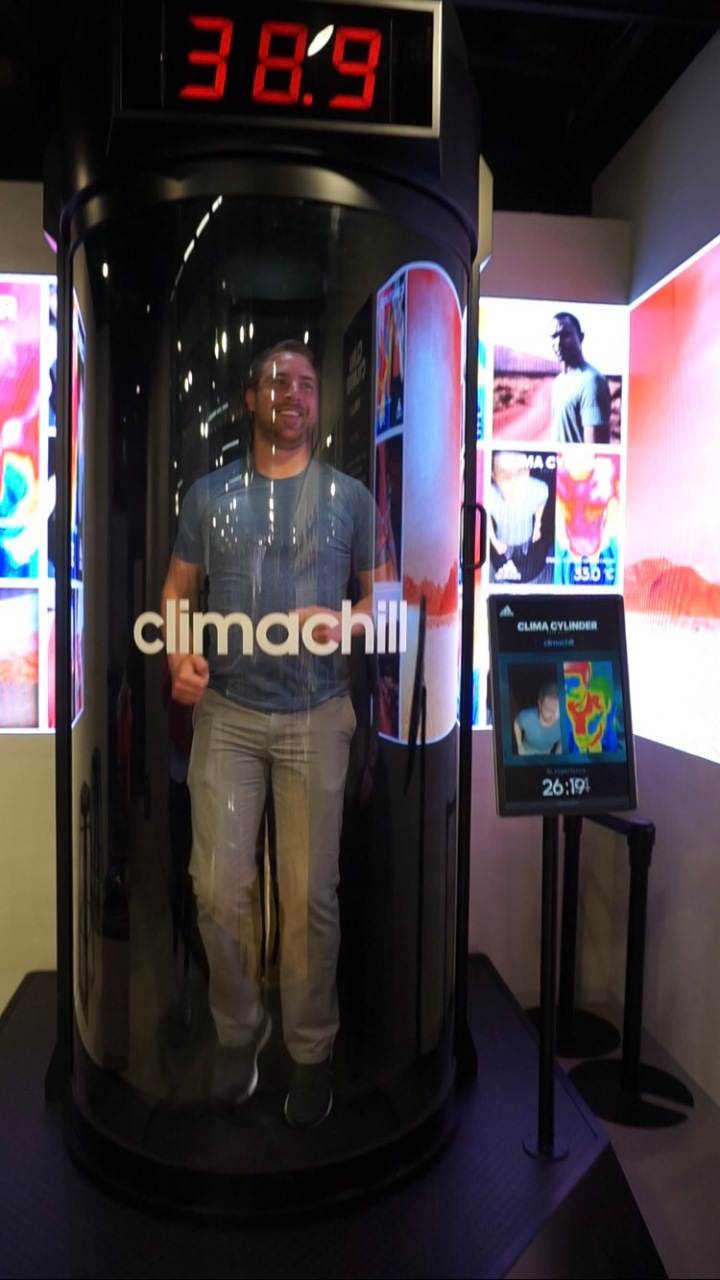 After Adidas, we continued to walk aimlessly around Shibuya. We would walk in and out of stores. Finally, we decided to grab some burgers at Lotteria. We just ordered our food downstairs and took it up to the 2nd floor to grab some seats to eat. I’m not sure which burgers we got, but they were OK. Nothing special. We later learned that the sushi restaurant we wanted to go to was actually around the corner from Lotteria, so we decided to go there for dinner.

After lunch, we went back to the Shibuya Station and took the JR Yamanote Line to the Harajuku Station. We walked right into Takeshita Dori and found the ¥100 Daiso Store.

I went searching for this charcoal peel-off mask, but was unsuccessful. T, however, found a bunch of stuff to buy for people back home. After Daiso, we continued down Takeshita, which was filled with a bunch of shops, tourist, and shady looking people like in Shinjuku. We made our way to Meiji Dori and found yet another Adidas Store. Again, we didn’t buy anything. Then we found ourselves on Omotesando, where we saw the entrace to the Tokyu Plaza Omotesando Harajuku (a shopping center); however, we decided not to go inside.

We just continued to walk down Omotesando until we saw Aoyama Flower Market Tea House. I’ve seen this Tea House all throughout my Pinterest and Instagram and was very eager to check it out. The flowers inside were beautiful; but quite pricey. Also, there was a line of 15 people waiting to go into the Tea House, which was quite small, so we decided to not wait and leave. We got into the Omote-sando Station, hopped onto the Ginza Line towards Asakusa, and went back to Ginza. We went back to our hotel for a nap.

We both woke up pretty hungry and decided to walk to a yakitori place nearby before going back to Shibuya for sushi. We got ready and walked to Torigin Honten, which is about a 7 minute walk from our hotel. There was a wait of about 15 minutes, but we were seated at the counter where we could see the chefs cook up the skewers. We were given an English menu and decided on a couple of skewers: yakitori (chicken pieces), negima-yaki (chicken pieces with Japanese leeks), torikawa-yaki (chicken skin), and uzuranotamago-yaki (quail eggs); as well as some beer (we got the Half & Half which was 1/2 portion draught and 1/2 portion dark draught). A man with an electronic device came and took our order and then we watched the grill masters do their thing. It amazed me the precision those men had with the grill. They knew exactly when to turn each skewer and how long to leave the skewers on the hot coals to cook them thoroughly without burning them or having them under cooked. They were PERFECT! 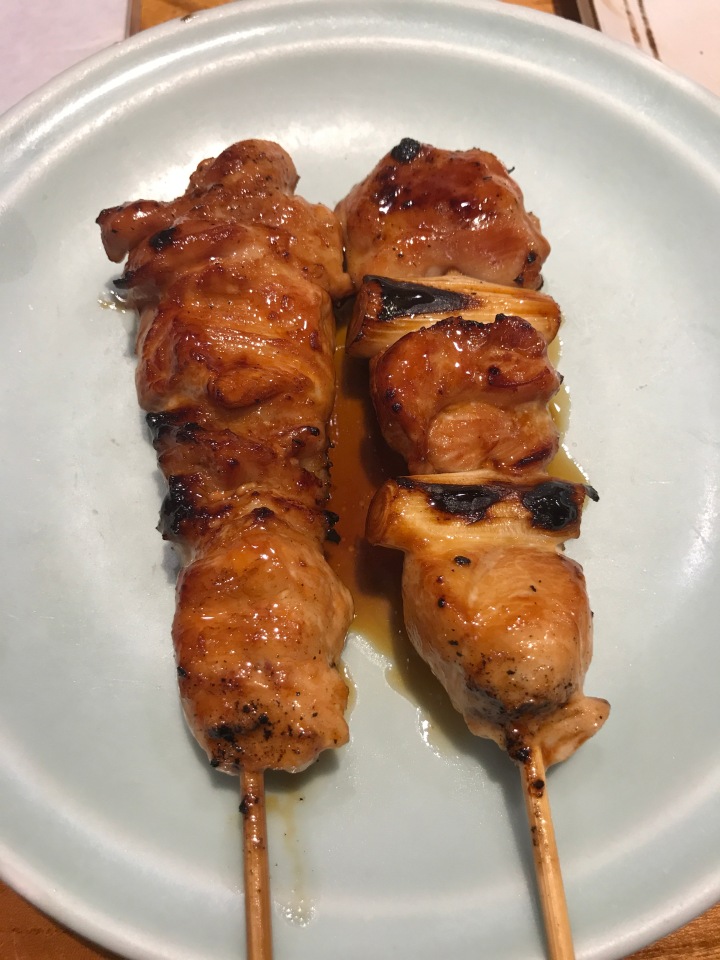 After our meal, we found our way back to the Ginza Station, took the Ginza Line towards Shibuya, and got off at the Shibuya Station. Shibuya Crossing at night was a bit more hectic, but still, nothing too crazy. 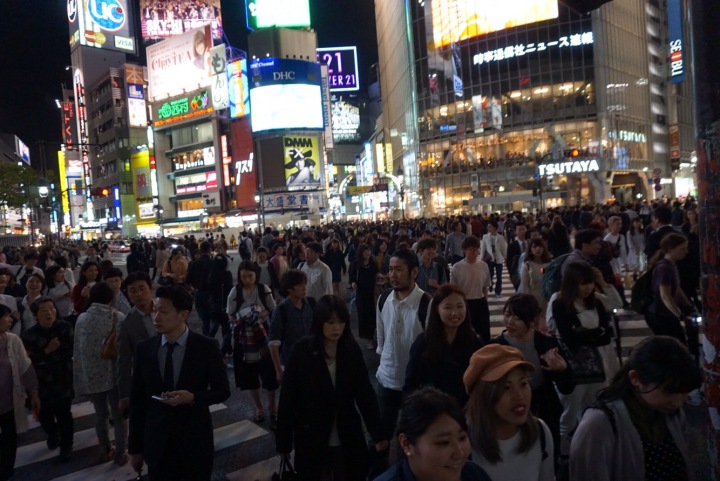 We walked to Uobei Shibuya Dogenzaka, but found a massive line of people trying to have dinner there.

Pretty discouraged, we walked down Dogenzaka and found a Sushi-Nova, which is also a conveyor belt sushi restaurant. There was about 10 people ahead of us, so we decided to wait. We waited about 20 minutes, and we were finally seated at a booth. On the table was a tablet in which we could place our orders. We changed the language settings to English and browsed through the menu.

We decided on a couple of nigiri pieces (seared salmon with a special sauce drizzled on top; ebi with the same sauce; salmon; and salmon with avocado, onions, and the same special sauce), coke, and sake. While waiting for our food, we prepared our soy sauce, opened up some wasabi packets, and made some hot tea. Our food came out to us on these pretty fast conveyor belts which stopped at our table. Once we retrieved our food from the belt, we select something along the lines of “received” on the tablet, which sends the delivery plate back. 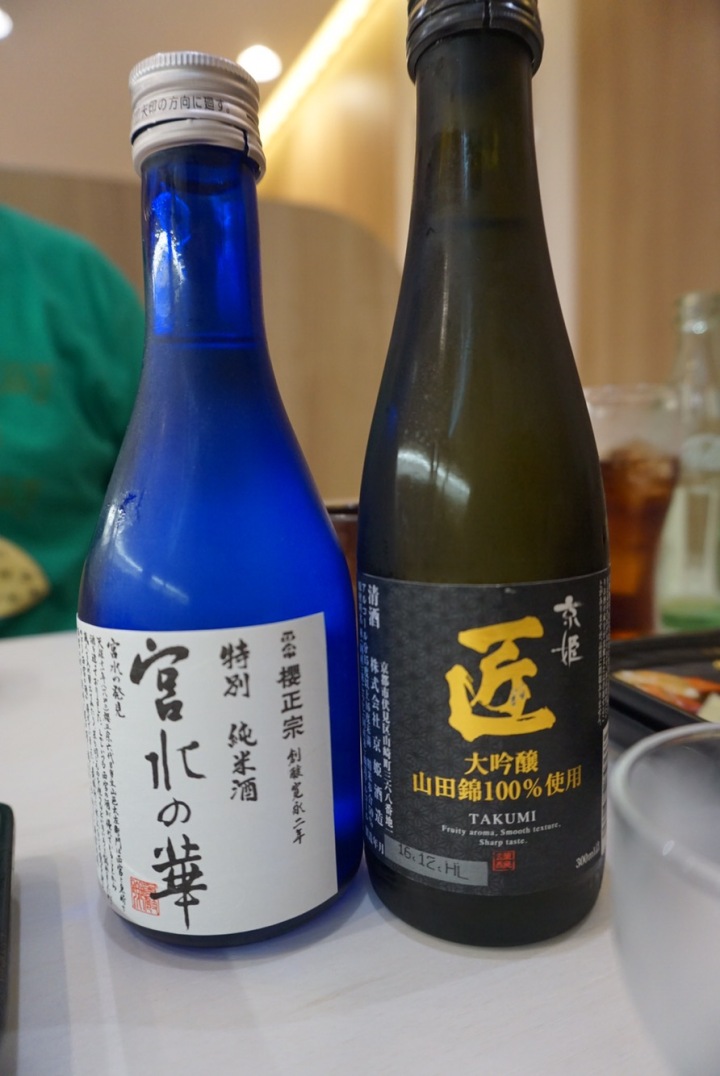 After devouring all our sushi pieces, we ordered a salmon roll with avocado and the special sauce drizzled on top and more of the seared salmon. We ordered a couple of items, but nothing memorable.

After sushi, we made our way back to Ginza using the Ginza Line towards Asakusa. When we got to our hotel, we drew a nice warm bath, threw in a bath bomb we bought at Lush, grabbed the leftover sake, and had a nice warm bath. It was a wonderful way to end my birthday day.

Honestly, I could’ve done anything for my birthday and I would’ve enjoyed every moment of it because of T. He is hands-down the best thing that has ever happened to me. Yes, I have an amazing family and friends. Yes, I have a great job. But for him to come into my life and turn so much around and make me feel loved and happy every single day. What more can I ask for? I was able to celebrate this milestone birthday with the man of my dreams in a foreign country, while making memories, and not driving each other crazy. Cheers to being 3-0.