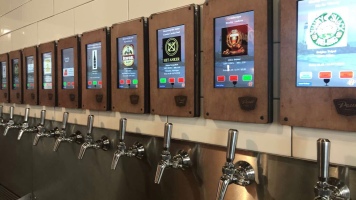 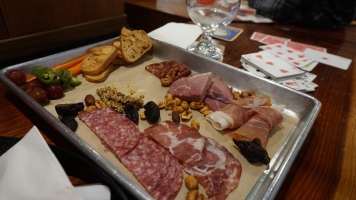 We didn’t have much plans for New Years. New Years Eve started off with us going to Costco. Actually, we were on our way to Total Wines to buy a bottle of champagne. However, we were both hungry, so we decided to go to Costco. As soon as we walked in, we saw bottles of alcohol. We ended up buying champagne, prosecco, and tequila. Definitely more than what we really needed. We also bought food: hot dogs, pizza, and a chicken bake. First of all, Costco got rid of their polish dogs. WTF! I mean, their hot dog is still good, but CMON! On our way home, T’s dad called him and told him he was at Jack’s in Fremont and to see if we wanted to join him for beer and football. Of course we said yes. So we made our way over to watch the 49ers game. Him mom and brother ended up meeting us there, too. We went home and just hung out until about 10pm. We got a text from my cousin saying to come over for board games. So we made our way over and played Banned Words. The game was a bit confusing at first, but we finally got a hang of it. We were so invested in the game that we didn’t realize that the countdown to 2018 was about to begin. It was happening in 40 seconds. The boys were throwing noise-makers at each other and we were putting on our New Years Hats. As soon as it hit midnight, we all greeted each other. Then it was back to our boardgames. Around 1 we headed back home.

New Years Day, T decided that we should go to Santa Cruz and check out Pour Taproom. It’s been bookmarked on my Yelp for some time. This place was pretty neat. Once you get in, they give you a glass and a wristband that activates the tap and keeps track of how much you pour. For each selection you get to choose a size: 2oz taster, 4oz flight, or 6oz full. After 32 oz, you are supposed to go back to the front so they can give you more “credits.” Basically, they don’t want you to get too drunkies. And the place has 30+ beers, wine, and bubbles! Our favorite combo was the Mother Earth Bew Co’s Cali Creamin and Altamont Brew Work’s Nutty Operator. What we did was fill up the glass with  full 6oz of the Cali Creamin and then a taster of the Nutty Operator on top. SOOOOO GOOD!! We were there for a good 3 hours? Maybe even 4? Totally forgot. We definitely had a good time and we will be back!