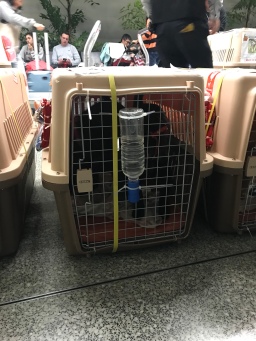 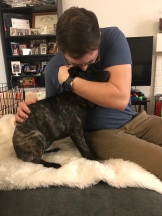 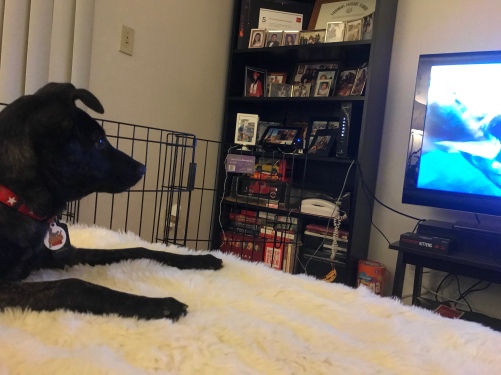 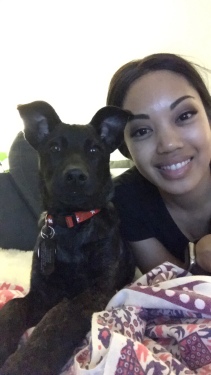 01.15.18 – After Pookie had passed, I thought about waiting a while until I get another dog, but not having her or Marley or a dog in general just did not feel right. T suggested we rescue a dog and one day we found Pepper. I was scrolling through PetFinder.com and I was showing T a picture of another dog when we came across a derpie-faced 5 month old Formosan Mountain Dog/ Lab mix puppy named Daphne and we fell in love.

We contacted Melody from Love & Second Chances Rescue, which is a rescue based out of Pleasanton, CA. We found out that Daphne was part of their international rescue in Taiwan. We did not let that stop us from completing their adoption application. As part of the adoption process, T and I had to send in a video introducing ourselves, as well as a home tour to make sure it is sufficient for a new rescue puppy. New Years Eve we were told our application had been accepted! At first I was quite nervous about adopting a dog, especially a rescue, but much reassurance from T, I knew we would be providing a loving home to a new dog. Also, Melody, Love & Second Chances Rescue, Eve, and Eve’s Dogs made the process so easy! We were in constant contact and they also invited us to a Formosan Mountain Dog group and the Love & Second Chances Rescue group so that we have a larger support system if needed. The adoption fee was $350.00, which we found completely reasonable! The fee covered her vaccinations, surgery to get her spayed, deworm, microchip, flea/tick prevention, as well has her travel expense. If anyone is looking to adopt a dog, I highly recommend going through Love & Second Chances!

After 2 long weeks of waiting, Daphne boarded a plane in a kennel with her sister in Taipei, Taiwan and made the long journey to SFO and we picked her up. She was definitely a shy/timid little pup when we picked her up. I took her out of her kennel on our way to our car and she just let me hold her. During the car ride home, T held her and she basically fell asleep in his arms.

Our first night home, she had a couple of accidents in the apartment even though we walked her for 30+ minutes every other hour. When we turned on the TV she was so confused and she sat there watching Forensic Files with us. When she saw her reflection for the first time, she thought it was another dog and she tried to play with herself… and she ended up peeing in front of the mirror… twice.

That night, we fell asleep on the sofa just to wake up to her falling off the sofa and crashing into her kennel. We ended up moving onto the bed, where she fell asleep in between T and I and slept through the whole night.

We renamed her Pepper because of her brindle coat. She’s an absolute wonder. Very loving and affectionate. She is quite timid, but she is coming out of her shell more. We love her and can’t wait for more memories with her!