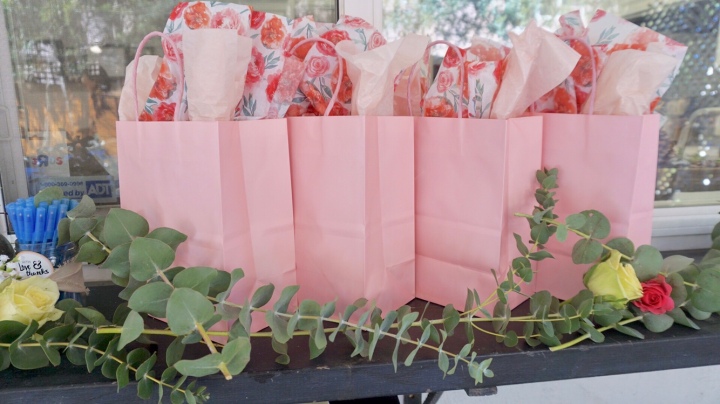 If you read my previous post, you would know that my recently threw a bridal shower for my cousin. One of the things I volunteered to coordinate was the bridal shower games. Since we were in a time crunch the day of the actual shower, we decided to stick to 4 very simple games that required a pen and paper. The games we chose were the following: 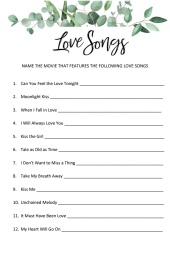 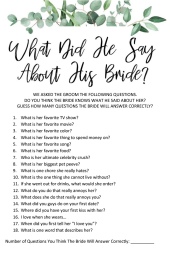 Since eucalyptus seemed to be a recurring decoration for the bridal shower, we decided to stick to it as a decoration for the games. I found the image online and was able to use Microsoft Paint to select which border I wanted. Then I used Microsoft Word to put together the games since I did not have Adobe Photoshop on my computer at work.

I decided to stick to PopCulture thinking the guests would know about celebrities and movies.

For “Famous Couples,” I chose a handful of celebrities and their significant others, as well as adding the soon-to-be bride and groom. The celebrity couples ranged from music artists, to movie stars, to royalty. I made it a point to pick couples that were still together. So no adding Britney Spears and Justin Timberlake.

For the game “Love Songs,” I picked Love Songs from movies that were pretty iconic and the ones that the bride enjoyed. Disney songs seem to be pretty memorable and easy to guess. And movies like Titanic and The Bodyguard are easy to guess, too.

For the game “What Did He Say…” we asked the groom-to-be questions about his bride. He provided us with answers that pertained to her. For example, “What is her favorite TV Show?” Then we asked the bride the same questions. The object of the game is to guess how many do you think the bride and groom would match in answers. Watching the bride’s reactions to the groom’s answers were hilarious especially when they were so wrong.

Finally, the last game was one of those “Don’t Say ‘Wedding'” games. We chose the word “wedding” as the “forbidden” word because they were getting married in a couple of days. Instead of collecting pins, we thought it would be fun to collect rings. The rings, rose gold frame and terrarium  were from amazon. Whenever someone heard someone else say the word “wedding” that person can steal all the rings they had.

As for prizes, we decided to go with nice, but yet inexpensive items. Bath & Body Works had a sale on their 3-wick candles and they were $12.95. They also had a coupon for $10.00 off any $30+ purchase, so that helped lower the price even more. I get their email promos, which always alerts me when the candles are on sale. Just this past week, the candles were $12.95 with an additional 25% off. Also, another prize we added to each bag was bath bombs from amazon. I bought a set of 9 for $14.99 and stuck 2 bath bombs per prize bag. My cousin works at a salon that offers eyelash extensions, so her manager donated an eyelash extension voucher for one of the prizes (which ended up being the “Don’t Say Wedding” prize).

Hopefully this post gives some inspiration for bridal shower games!