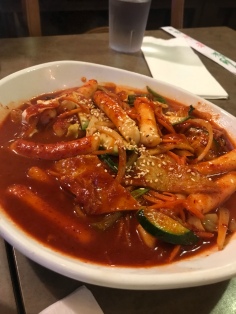 I was craving Korean food when my sister was in town so we decided to try Ka Yumi in the Irvington district of Fremont. I’ve had this place bookmarked on my Yelp for quite some time so it just made sense to finally give it a go.

We ordered the BooDae Hot Pot, Corn Cheese, Ttukpoki, and half spicy half sweet chicken wings.

The BooDae Hot Pot was by far my favorite dish we ordered. Their take on Budae-jjigae had bacon, sausage, kimchi, and other yummy goodness. We opted to add some ramen noodles to our hot pot. The dish was so flavorful! It did not disappoint.

The corn cheese appetizer was OK. I’ve had better corn cheese. The cheese started to solidify shortly after receiving the dish, but the flavor was nice.

Their Ttukpoki (or how I know it as Tteokbokki) was OK, as well. It’s a dish with rice cakes, fish cakes, veggies, gochujang (Korean chili paste), and some sort of soup stock. It didn’t hit the spot as I was hoping it would’ve.

We ordered so much food that we took a lot home and had it for breakfast the next day. I enjoyed what we ordered and I will be back!