We were supposed to go to the Dumpling Down festival in San Francisco; however, when we pulled up to the place, there was a massive line just to get inside. We decided to look for another dog friendly alternative and ended up at Standard Deviant Brewing.

We were lucky enough to find street parking right next to Standard Deviant. Walking to Standard Deviant was a bit challenging for Pepper. She freaks out in unfamiliar places, especially when it comes to walking on the street. Trying to cross the street, she didnt want to budge and tried to pull out of her harness, so T had to pick her up and carry her across the street. Back on the sidewalk, she was OK. City life is not for Pepper haha. 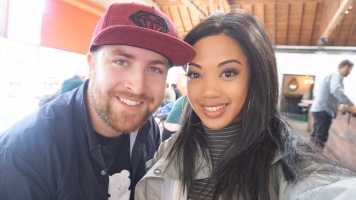 As soon as we walked in, we noticed wooden picnic benches, pinball machines, a large jenga set, a shuffleboard, and the bar. There was another dog sitting at one of the picnic benches, so we opted for another table at the opposite side. Pepper tends to get super excited around other dogs and we wanted her to mellow out.

I ordered the Oatmeal Stout, which was a great beer. T ordered the Imperial IPA, which was just as delish! At the corner of the bar, they had a bunch of board games and cards. We played blackjack, but that game ended quickly. We stayed for 2 rounds and decided to head out and get a snack somewhere else.