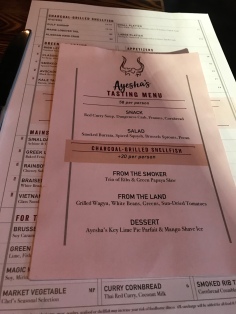 We came in with high expectations for the food… which were not met.

We made reservations at Michael Mina and Ayesha Curry’s restaurant International Smoke in December, and yes, it was pretty much fully booked until March. The restaurant opened at 5pm for dinner on a Sunday and our reservations were at 5:15pm. As soon as we checked in with the hostess when the doors opened, they sat us immediately with some menus. Someone then came by with waters and dropped them off, as well as took our drink orders. We both ordered the Ninkasi Brewing Vanilla Oatis oatmeal stout beer ($8/ea). I thought the restaurant was cutely decorated. The bar area was really nice and I wanted to check out the seating area behind the bar as it looked like an atrium but I did not have the chance to see it.

Adam was our server for the night and he came by to see if we were ready to order. We ordered: 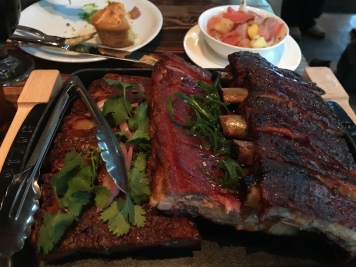 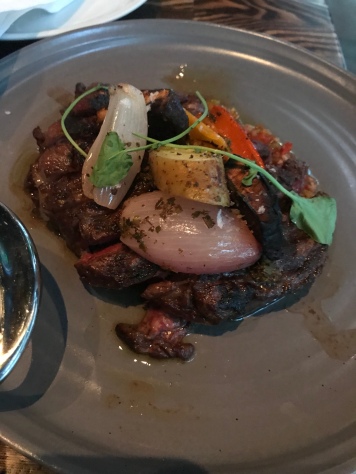 The food just did not live up to the hype for this restaurant and the amount we paid. Would I be back? Most likely not, but I’m glad I tried it out.

Note: If you do decide to go, ask if Adam is working and if he could be your server. He was AMAZING. Knew everything about the menu or at least played it off as he did. Seemed very knowledgeable of the menu (we overheard him talking to another table about food allergies and someone asked about gluten-free options and he asked a bunch of questions and another table talked about being allergic to shellfish). We thought he timed out bringing our food excellent so that we didn’t have a ton of food in front of us or that we were waiting for food. We felt as if we always had food. Plus, before our entrees came out, he came and took our appetizers and boxed them and gave us a ticket (think of it as a coat check) for our leftovers. Also, our water glasses were never empty, someone was always coming by and filling up our water. Even though our food was not memorable, the service we received was… so GREAT JOB!

Who knew that a pint of angry orchard would lead to this? Dress: @lulus Flynn Lace Gown Suit: @theblacktux Bouquet/Boutonnière: @blissfulblooms.co Location: SF City Hall Photographer: @davidkimphotography #taylorisaglogetter #married #sfcityhall #wedding #brideandgroom #theknot #weddingwire #bride #groom
The Johnsons. 02202020. Dress: @lulus Flynn Lace Gown Suit: @theblacktux Bouquet/Boutonnière: @blissfulblooms.co Location: SF City Hall Photographer: @davidkimphotography #taylorisaglogetter #married #sfcityhall #wedding #brideandgroom #theknot
In a couple of days I’m going to be MRS. J. Don’t worry, y’all. This isn’t my dress. #weddingdress #bride #wedding #misstomrs #theknot
Happy Valentine’s Day to my soon-to-be hubby @taylor.tuesdays !! You cute or whatevahhhh.
Gloriene is getting Taylor’s Johnson !! Can anyone give us some wedding hashtag suggestions? #dressshopping #mrsjohnson #misstomrs
Look who got his wedding band at the @acsbridalexpo today !! #acsbridal #acsbridalsweepstakes.
Happy New Year !! Hope everyone has a healthy, prosperous, and wonderful new year !! #newyearseve #happynewyear #nye #gatsbyparty #gatsby #roaring20s #2020
Merry Christmas from my family to yours!
Some of you may know that I have a slight Disney (and Disney Pin) obsession and through that I met these wonderful group of ladies. They quickly grew to be some of my ride-or-dies. They are some of the most kind-hearted, positive, uplifting, and beautiful people I’ve ever met and I am so fortunate to able to call them my girls. Thank you for such a fun and amazing weekend !! I swear I feel like I’ve known you girls forever. Cheers for more memories !! (Not pictured but there in spirit: Maria and Gen !!) #disneyland #disney #dca #californiaadventure #christmasbarf #friends #littytitty
Story Time: We went to Yosemite for our anniversary and since Veterans Day was a holiday, there were sooo many people everywhere. Taylor knew I wanted to take some good pictures, so he pulled over to this field and of course I gave him a hard time because this wasn’t part of our itinerary and Pepper wasn’t allowed, but he wanted to check it out so we did. We went down a path that no one was on and I took pictures of him and Pepper. He then asked to take an “action shot” of me and pepper looking away. When he said it was OK to turn back around, Taylor was on his knee with the ring. I am beyond excited to start this next chapter in our lives. I cannot wait to marry my favorite person !! I love you, Taylor. #engaged #yosemite #bestdayever #theknot #isaidyes #weddingwire #engagementring #ring #diamondring #glotaystheknot #taylorglosup #futuremrsjohnson #glogetstaylorsjohnson #justsaidyes @weddingwire