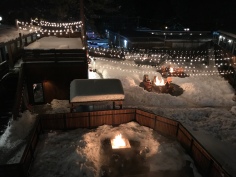 The last activity that was planned for Camp BC was S’Mores + Stargazing. When you think about camping, doesn’t sitting by a warm fire roasting marshmallows for your s’more and looking up at the sky just feels… right? Plus, what is camp without s’mores!?

After dinner we met up at the Mountain View Deck on the 3rd floor to snuggle by the fire pit, look for stars, and have s’mores. There was one fire pit, a couple of benches and chairs. There were some blankets, which were perfect for that Tahoe chill. A s’mores “bar” was stationed with roasting sticks, marshmallows, graham crackers, and chocolate. Oh, and you can’t forget about the hot chocolate… and WINE! Unfortunately, it happened to be a cloudy night, so stargazing was not happening. HOWEVER! We did talk stars and constellations, as well as story telling of how we got some of the stars/ constellations.

The young woman that was telling us all about the stars used to be a park ranger at Sequoia National Park and spoke at the astrology classes they had there. She told us about how the Big and Little Dipper came about. How there are more stars in our galaxy than there are grains of sand on earth. And how a shooting star is the size of a tic tac!

After a while, it dwindled down to 5 of us girls and we had girl talk and went on tinder to look for some hot dates for 2 of the girls that were single. What a fun way to end Camp BC!