First of all, I hate flying. Most people know this about me already. Let’s just say I had a panic attack on a short flight to Vegas for my 24th birthday and since then it’s been no bueno for me. I’m just terrified. The fact that flying to Jamaica was going to mean experiencing another 4 takeoffs and landings in a week was not easy for me mentally and physically. Anyways, let’s begin!

T and I took the red-eye flight from SFO to Houston. The flight itself wasn’t too bad. The guy sitting next to me was an interesting fellow. He KOed super fast, but his head kept flopping around everywhere. You know when someone is trying super hard to fight the sleepies, so their head keeps dropping? Anyways, he kept doing that for the almost 4 hour flight. On top of that, when we were about to land and the cabin lights turned on, he flagged down a flight attendant asking them to turn them off. Weird cat. Well, our layover in Houston was almost 4 hours long, so we hung out at the United Lounge, but they didnt start serving alcohol until like 7am? So that was like an extra 2 hour wait. That layover was just LONG. Anyways, the flight from Houston to Jamaica felt like an eternity, even though it was about 3 hours long. Customs was another 30-45 minute wait. Finally, we met our driver and we were on the road for another 2 hours to get to Ocho Rios from Montego Bay. Yes… that was quite a travel day. Our driver, Andre, was such a great guy! Easy to talk to. Pointed out some places on our drive and gave us some recommendations to try (like Scotchies for jerk chicken!).

When we arrived at Moon Palace Jamaica, we got got situated and changed into swim clothes. Just like last year’s trip, T and I shared the suite with his parents and little brother. Our room was nice, but that view was even nicer! 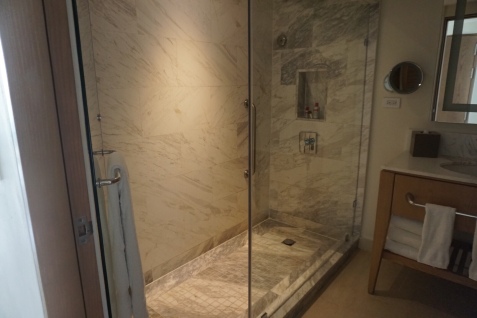 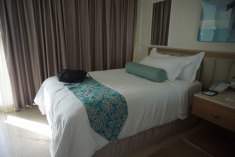 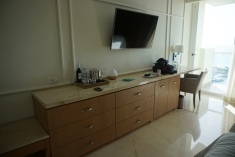 We met with everyone down at the beach and enjoyed the warm, yet very salty water. B got stung by a jellyfish on his foot, but we got some vinegar on it and he was perfectly fine after. 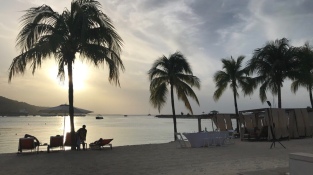 After the beach, we all got ready for dinner and had a great first dinner at their steak place. All of the steaks were massive! I wish I took a picture of my steak, which was supposed to be 6oz yet it was the size of my hand and like 2″ thick. Our first day was definitely a LONG day, but already a great start for a vacay.